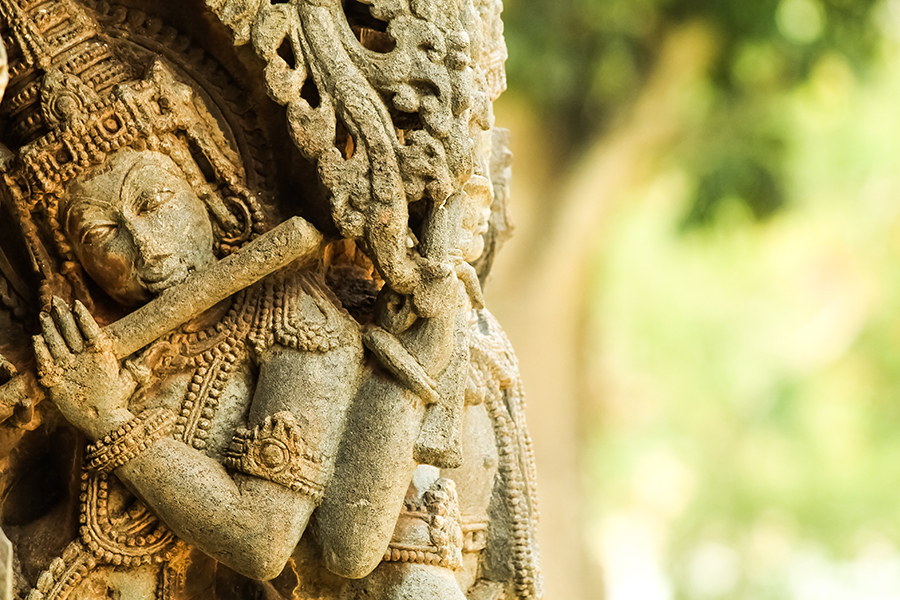 I want to talk a bit about the Bhagavad Gita. There are structures that exist in the subtle worlds, the worlds beyond our boundaries that are here for the purpose of supporting the human being in the evolution of consciousness. They are like archetypal energetic structures that have Beings associated with them that are here to help bring those structures down into the world to those who are receptive. These structures include Christ Consciousness, Buddhism, Mohammedanism and the Gita. These exist in the subtle planes and are just waiting for those who are aligned with that particular vibration. The Gita is this.

The Gita is an energetic structure that exists in the subtle world that when it is evoked it brings with it this ancient Hindu Vedic tradition of spiritual wisdom that has been around for thousands of years. The Gita was recorded through chanting. Every verse in the Gita is a mantra that was carried from generation to generation through teaching young boys the mantras which held the energetic structure. This rich deep profound body of experience and knowledge was kept alive in this way until mankind’s consciousness was ready for written language. It was kept alive through an oral tradition like other religions and traditions that have been kept alive through dance, through ritual, and through mantra.

When I went to India initially everything was happening to me spontaneously. I didn’t need a scripture. I didn’t need a practice. I was being practiced.  The Universe was running the show. My teacher was devoted to the Gita and I was devoted to my teacher so I wanted to learn about it. He knew it by chanting it. He is an Indian Brahman and he learned it as a child. His grandfather was a priest in the Hindu tradition. He knew it as a chant, not as a scripture, as most Indian people know it. At first it was just words to me. It seemed like this mythological story and my western mind was trying to understand it with my reader’s comprehension. But at some point it opened and I tapped into this rich transmission, this huge body of information that proved in time to be an accurate description of the journey that I was unwittingly on, a natural unfolding of stages and processes that revealed the fact that this is what lies inherent in the collective consciousness. This is a description of the natural journey of consciousness when it reaches the conclusion of its human embodiment and begins to move into relationship with its true nature.

And, of course, I got to meet Krishna. These meetings would come occasionally, mostly through my teacher. I would see Krishna in my teacher, a very tangible personality showing up in the personality of my teacher. Krishna spoke through him and something of Krishna was present—that quality of the Supreme Being embodied with that magnificent presence and authority and power—this huge tangible transmission of this inexplicable force that was both loving and true. It was always a shock to meet this in the early days.

The power of the Gita comes through a living teacher who is using the Gita as the structure. The consciousness of the teacher empowers the Gita—turns it on. The people who link with that teacher begin to access the universal energies of the Gita through the grace of the teacher empowering that scripture. Although what happened to me was spontaneous and natural, the articulation of that unfolding, the specific stages of that unfolding, all came through the Gita. It gave me a language and a frame to define what it was that had happened. When those linked with me study the Gita they begin to build a direct connection to this universal archetypal force and it descends and empowers the quality of consciousness that they are. It is not a dogma or a religion. It is a description though the Vedic tradition of what happens for every evolving soul at some stage in their journey. Whether through Shamanism or Christianity or Sufism, they are all expressions, each with its own flavor, of the same principle. Activating any one of them allows you to activate all of them. For realized beings all teachings are true if their consciousness is sufficiently prepared.

So studying the Gita, writing the Gita, sharing your insights is one way that I can nurture each soul directly or indirectly linked with me without me having to be physically present, because the very essence of what I am can come to you through this little book. Nothing else is required except sincerity and aspiration or longing for that divine principle. If you have that and if you have a modality that is truly empowered and that can truly work then wherever you are you will be nurtured on your own journey, your own unfolding. So the Gita in this way is one of the great pillars of my teaching and of mankind’s body of wisdom.