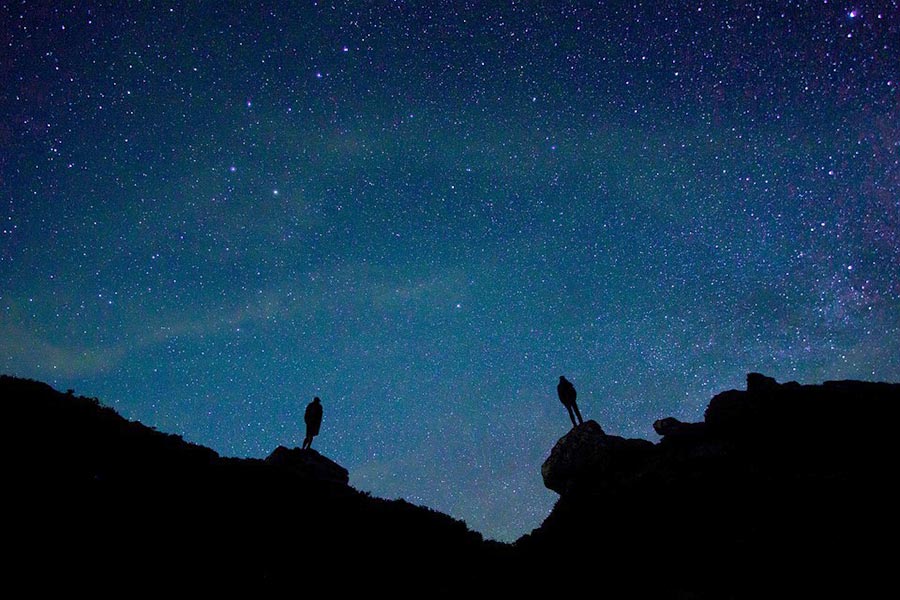 “All the time I’m in this enthralled, wondrous vision; in the whole universe, and it’s brilliant, it’s alive, it’s real. No veil, no spacesuit, no spaceship. Totally right here, right now. No boundary, no separation; just me and the infinite potential of existence.”

I’m seeing some dualities or qualities of being in people that hadn’t been so clear before. I was trying to come up with the opposite of victim. Victimizer, in one sense, is the opposite, but there’s also the recognition that it’s about choice or the capacity of choice.

Recognizing that we choose what exists, what arises, versus feeling that we don’t choose it. So, the real difference between a victim and a victimizer is really not relevant. The real conversation is in the domain of choice. Now, when you look at choice, most choice is conditional, it’s not coming from truth, but instead it’s coming from ego. So, choices that come from truth have a different paradigm, but they both have an expression of will, intelligence and will. So, there is a choosing that comes from a will or a capacity to decide, and based on the nature of that capacity, that’s what determines the nature of the will and the choices being made.

Wow! I’m in the middle of the stars. Oh my god, it’s so beautiful. Of course, this is my home, at least for now. This universe, this physical universe, is beautiful. I’m so happy to be here with it. I am the infinitive, but it’s also my mission; it’s larger than this individual confinement or planet.

Anyway, that was a bit of a distraction. Let’s go back to the conversation about choice.

So, choice, you might say, is measured by the power of effectiveness. True power is also effectiveness. So, the more powerful you are the more effective you are. Of course, all of these are relative expressions of that principle of intelligence and choice. So when our will is aligned with the original intent, then both the power and effectiveness are greater than when it’s not so aligned.

Of course, the original intent includes diminished capacity, ignorance, all of that is there, but that was only an interim step. The ultimate step is when the self-aware intelligence, that can only occur in an awakened manner, moves into alignment with the original intent, becomes aware of itself as not only the limited individual, but as the universal concurrently inhabiting a place in time, a vehicle and place and time, with a purpose. Intelligence, purpose, will, vehicle, capacity for action, the materialism with which to act, the effectiveness; all these are measures. Which one can define the pathway out of limitation, out of bondage, out of ignorance, into freedom and truth?

It’s quite something. The actualized human potential is to create a human being that is concurrently divine; being both human and divine at the same time. That’s it, that’s the flowering, that’s the purpose of existence. I guess what’s happening  is that I’m getting what this means at a more profound and integrated level than I’ve been able to get previously. I’ve been “languageing” this for years and years, but what does that mean relative to my relationship with fellow human beings and the rest of the world?

It means that I have a say, a very powerful say about the nature of the evolving human species at this time. Not that my say is the only say, because there are other beings that have power and authority to varying degrees throughout the planet. Although I feel that, at this time, most are for good, there are those who would choose to do harm for their own justifications and reasons due to some limitation or some error, and possibly it’s necessary for both to co-exist in order for this to actualize, but perhaps not too.

What is the role of “Asat”? It’s to simply be the container for “Sat” not to be the destroyer of the container. There is no need for destruction or evil, past a certain point, it can be left behind. Except, perhaps, as maybe a necessary stage in the process of construction. After all, this is a creation; this existence is creation not destruction. Destruction only has a role to play within the creation, so that the creation can perpetuate. Since nothing is truly destroyed, the creation inherently carries with it destruction but no anymore than is necessary in order that the co-creation can keep evolving.

There’s no doubt about it from this perspective, there’s only positive in the future; greater and greater and greater, unimaginable positive expression of the inherent truth into existence. We are just beginning our journey of coming out of the mud on this planet. The soup that was necessary for matter to grow and develop to the point where our conciseness could wake up and take over the process, that’s no longer necessary. There is an inherent intelligence in all things. In all that is guiding us; it’s not in any way something we could define in separateness.

The only time there’s any apparent separateness is in the human container, but there is this unique capacity to focus when that principle can wake up in an individual and can speak, like I’m speaking now. This is incredible. It’s the voice of the universe coming through a form and it knows it and the universe knows itself through it.

What’s the payoff or the benefit? It is the knowing, it is the capacity for being, existing, or experiencing. Knowing its own nature in the infinite, the multiplicities of its expression, and that’s all there is. It’s not a play, it’s an underestimation. All the time I’m in this enthralled, wondrous vision; in the whole universe, and it’s brilliant, it’s alive, it’s real. No veil, no spacesuit, no spaceship. Totally right here, right now. No boundary, no separation; just me and the infinite potential of existence. The one, me, into the infinite potentiality. Not my ‘me’, the one ‘me’; Supreme Being residing in its own fulfillment.

Experience by its nature is leading; knowledge by its nature is leading. It arises up like a wave and subsides back into the ocean. The ocean is the truth; the creation is the expression of that truth. So all that I share, all that I’m seeing, is an arising from this infinitude of that which I am into manifest expression and then back again into the infinitude of my eternal potentialities. The fabric of existence rests on the foundation of the ocean of this.