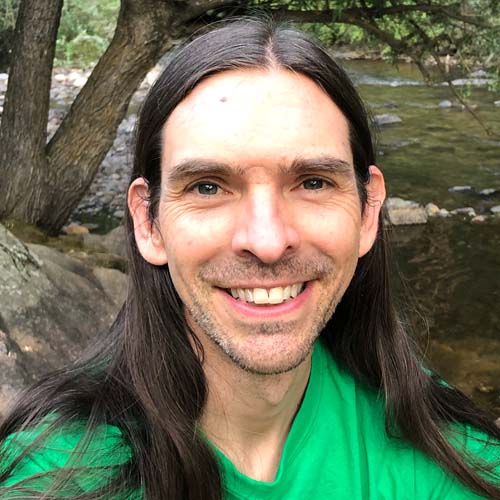 From the first time I heard Sat Shree speak, I felt a connection and a draw. This has been and continues to be a palpable felt sense in my body. There is a calm, clarity, and a faith that comes through my connection with Sat Shree and with the New Dharma sangha. It is my greatest joy to play a part in this work, through my own integration as a human and spiritual being, and serving a purpose far greater than my own individual life, but, which does not exclude it.

I had been drawn to spirituality from a young age, discovering meditation in my teenage years. I struggled to develop into my human life with bouts of severe depression and despair. When I was in my early 20’s, I found Naropa University, a learning institution that was based in spiritual principles and practice. Somehow, I could always feel that there was a way forward and all I needed to do was keep taking the next step, the next leap into the unknown.

It wasn’t until my late 20’s that another shift occurred. I knew it was powerful and sacred, but it came with immense fear. I knew that I needed help, help that was different from the therapy and psychological help that I had experienced thus far. Someone or something that could guide me through this deeper process that had already begun, but seemed to be accelerating at a rapid rate. Despair and aguish had returned, but it was different now. As if I could no longer exist in my current state; the shell that I had known was breaking. Around this time I discovered the teachings of Adyashanti and Eckart Tolle, which provided immense relief and some glimpse of understanding. I also met my first teachers, Lawrence and Christa, who were a tremendous support and again, inevitably, I knew there was a way forward. Even now, as I write this, the sense of Grace is palpable. This Grace has led me to Sat Shree. My Heart, My Body, My Whole Being surrenders to this Grace again, and again, and again.

This path is not easy. But there is nowhere else I would rather be than here, in the preciousness of this human birth, in this collective birthing of a new possibility for humanity.